for being first to report that three men who were working undercover investigating labor abuses in a factory that made shoes for the Ivanka Trump brand had vanished, and one was arrested. http://apne.ws/2sDWFu7

‘This is Joseph Moore’: FBI informant inside KKK reveals himself in riveting AP interview

AP investigative reporter Jason Dearen received a curious email on Dec. 1, claiming to be from Joseph Moore, a man Dearen had written about months earlier. Moore was an FBI undercover informant who had infiltrated the Ku Klux Klan in Florida and disrupted a murder plot by three klansmen working as prison guards.

Dearen and AP visual journalist Robert Bumsted soon found themselves in Florida interviewing Moore about his years in the klan.

Moore said he’d identified dozens of law enforcement officers who were either sympathetic to the klan, or active members, telling AP, “It is more prevalent and consequential than any of them are willing to admit.” Dearen also came away with details to further challenge Florida officials’ claims that they have no indication of wider klan or other criminal gang activity among their prison guards.

The “must read” story, accompanied by Bumsted's video, lit up online and numerous film producers inquired about film rights.

For chasing the story so long and covering it so well that it brought an underground FBI informant out of the shadows, Dearen and Bumsted earn AP’s Best of the Week — First Winner honors.

Some stories just stick with a journalist. For AP investigative reporter Jason Dearen, a sparse 2015 announcement — three currrent or former Florida prison guards, identified by the FBI as Ku Klux Klansmen, had been arrested for plotting a former inmate’s murder — sparked a yearslong reporting effort.

Dearen’s big break came last summer when trial transcripts revealed an FBI informant was the star witness against the KKK members, his secret recordings providing a rare, detailed look at the inner workings of the klan cell and the domestic terrorism probe. Dearen and visual journalist David Goldman retraced the klansmen’s steps through Palatka, Florida, then producers Marshall Ritzel, Samantha Shotzbarger and Peter Hamlin stepped in to create a riveting online presentation.

The resulting all-formats package had immediate impact, with Florida papers featuring it on home pages and front pages, and prompting calls for investigations into white supremacy among prison workers. The story found 360,000 readers on AP News and kept them there for an average of more than five minutes — longer than any other AP story in memory.

for revealing that a series of mystery illnesses in Cuba had started by hitting undercover CIA agents, and that yet another American had been confirmed as a victim. http://bit.ly/2wO5KlF

As Olympics loom, violence flares in Rio's slums, even those termed ‘pacified’

Ahead of the Olympics, an AP team in Rio wanted a close look at the city's slums, which have long been plagued with violence, to learn whether high-profile community policing programs are working in areas deemed `pacified.' Braving gunfire in what is considered a no-go area for reporters, AP produced up-close, all-formats coverage showing deadly violence continues to flare. 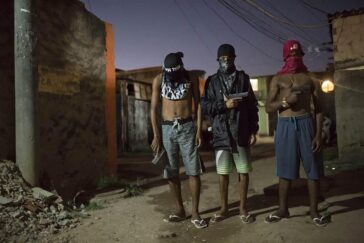