A nightmare in South Sudan

The scene was nightmarish. Women and girls fleeing fighting in South Sudan had taken refuge in a United Nations camp. As fighting subsided, they ventured out in search of food, but just outside the camp, they were dragged off by soldiers and raped. Two died of their injuries. At least one attack was said to have occurred within sight of U.N. peacekeepers.

The details in Jason Patinkin’s only-on-AP story could not have been reported without getting into the camp – but the U.N. at first blocked journalists from entering. Demanding access along with other journalists – and winning – in the midst of already challenging coverage allowed Patinkin to produce an exclusive that prompted outrage around the world. It earns Beat of the Week. 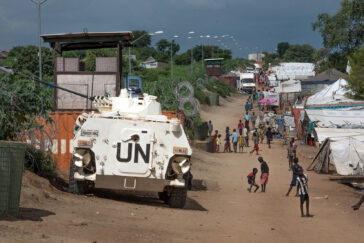 for cross-format coverage of deadly tornadoes that told the compelling, heartbreaking stories of those affected and kept AP out front. http://bit.ly/2jypEuf https://yhoo.it/2jfXfrP https://www.youtube.com/watch?v=ZEg2QvRmdlY

for traveling to Yei, in the thick of simmering conflict, and getting unmatched text, photos and video of ethnic violence that is threatening to plunge the new country into a spiral that a U.N. envoy warned could be like genocide. http://www.mrt.com/news/world/article/Wave-of-ethn...

Following in the wake of the Divided America series, the AP wanted to glimpse the country – the multiple Americas, joyous, dreading and uncertain – that Donald Trump would lead as the 45th president. But how to do it in a way that went beyond traditional text and instead gave customers and readers a visually engaging look at the U.S. in the time of Trump?

The answer: "Postcards from Trump's America."

A specially-selected team of reporters, photographers and videojournalists joined up to report from four distinct corners of the nation, and their work provided a unique window into what Americans are thinking and feeling at this historic pivot point. 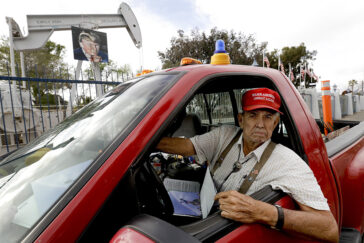 for dedicated source-building that positioned the AP to dominate coverage – with exclusive interviews and images – of Venezuela’s surprise release of American prisoner Joshua Holt. https://bit.ly/2LJ8ys2

Late in the evening on Dec. 4, West Region photo editor Stephanie Mullen was monitoring a fire that broke out in Ventura County, about 80 miles northwest of Los Angeles. Mullen knew that if the notorious Santa Ana winds really picked up the flames could start burning homes.

She hired Northern California freelance photographer Noah Berger, an expert at shooting wildfires, and partnered him with Los Angeles-based staff photographer Jae Hong. Berger and Hong were in place as daylight broke and the fire surged into the city of Ventura, where it burned hundreds of homes. They rapidly shot and filed, allowing AP to deliver striking imagery before our competitors had even started their day.

The AP owned the coverage in those important early hours with impressive play globally.

Later that morning, Orange County-based photographer Chris Carlson worked his way through road closures to make images of horses being rescued and flames overwhelming homes in Los Angeles County. And as the week wore on, photographer Greg Bull snaked his way through roadblocks and heavy traffic to capture nighttime images of fires in San Diego County, then slept in his car and got haunting daybreak photos of the destruction.

For providing a photo package no competitor could rival, Hong, Carlson, Bull and Berger share this week’s Best of the States prize. 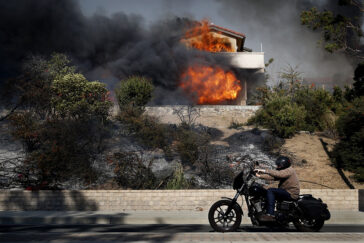 South Africa team delivers in all formats as violence spreads

drew on experience and stamina for comprehensive all-formats coverage of the worst civil unrest in the country's post-apartheid history.Starting with a weeklong stakeout and fast, accurate reporting on the midnight arrest of former President Jacob Zuma for contempt of court, the story quickly shifted: Zuma’s supporters burned trucks on a main highway, blocking it and severing the port city Durban from other parts of the country — the first sign of worse trouble to come.With violence spreading to various locations through KwaZulu-Natal and Gauteng provinces, leaving scores of people dead, the crew of staff and freelancers delivered strong, distinctive visuals, including multiple video edits, live video of rioting at a Soweto mall, drone images and dramatic photos despite attacks on journalists.Amid the chaos, multiple reports of violence, deaths, looting were deftly edited day after day into a comprehensive report that also provided political and societal context referencing South Africa’s underlying economic problems. The story “‘I was in tears’: South Africans take stand against rioting” stands out in the week’s strong body of work.https://aplink.news/qqjhttps://aplink.news/436https://aplink.news/brxhttps://aplink.video/q6ghttps://aplink.video/uchhttps://aplink.video/6uk

for offering a view inside South Sudan’s most notorious prison and also breaking the news that a South Sudanese rebel spokesman who had been deported by Kenya, despite his refugee status, was being held in solitary confinement inside the prison. http://apne.ws/2hb44NT

In a gripping exclusive that reads like the plot of a Hollywood film, Latin America correspondent Josh Goodman revealed the failed plot to oust Venezuelan President Nicolás Maduro by a ragtag group of 300 volunteers led by a former U.S. Green Beret. The ill-conceived plan called for the group to invade Venezuela from Colombia and ignite a popular rebellion that would end in Maduro’s arrest.

The plot was uncovered and dismantled with barely a whisper, but a cryptic tip to the well-sourced Goodman planted the seed of the story. Over the next several months he reviewed documents and interviewed more than 30 Maduro opponents and aspiring freedom fighters with knowledge of the plot, piecing together the narrative with a strong assist from investigative researcher Randy Herschaft.

Goodman’s story broke and reaction was strong: International media struggled to catch up and authorities in the U.S. and Colombia launched investigations. Senate Democrats have sent a letter to the Trump administration demanding answers.

For his impressive scoop on the failed coup that has been dubbed “The Bay of Piglets,” Goodman and Herschaft win AP’s Best of the Week award. 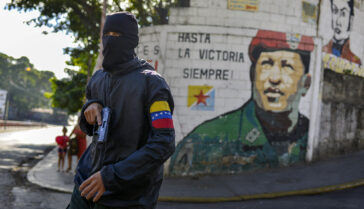 for getting behind the scenes of Argentina’s latest economic crisis with quick, intuitive all-format reporting to tell the very personal story of one young Argentine who, feeling devoid of opportunity, decided to migrate to Europe. https://bit.ly/2V8ASfX

for securing exclusive access to the first meeting of rival commanders under the country’s new peace deal as they now must make nice after five years of vicious fighting. https://bit.ly/2E2iRGq

pulled off a thoughtful, enterprising story about how the pandemic was playing out in France’s South American territory, French Guiana. With revealing interviews, Pedram showed how French Guiana’s outbreak exposed deep economic and racial inequality in the overseas department of about 300,000 people where poverty is rampant and health care is scarce. The story hit the two themes that are dominating news agendas among AP clients: the pandemic and racial inequality.In an AP interview, a representative of French Guiana’s Indigenous communities explained how the appearance of white doctors sent from the French mainland caused alarm, not relief. “There is still in the minds the time of colonization and the havoc wreaked by viruses brought by colonizers,” Jean-Philippe Chambrier, a member of the Arawak tribe, told Pedram. “So when they saw white people from the mainland, they made the link.”The story included images by photojournalist Pierre Olivier Jay. https://bit.ly/2WRNPK1 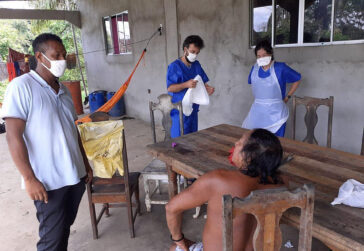 for an exclusive interview with Adam Crapser, who was deported to South Korea four decades after his adoption by an American couple. Crapser, forcibly separated from his wife, children and friends in America, described his landmark lawsuit against the Seoul government and a private adoption agency in a case that highlights the shaky legal status of possibly thousands of Korean adoptees. https://bit.ly/2FKtGP1

Two major calamities, one sterling response: Staffers of The Associated Press went to heroic lengths to tell the world the stories of two places battered by disaster. Their efforts were led to extraordinary achievements – in text, photos and video – and the Beat of the Week. 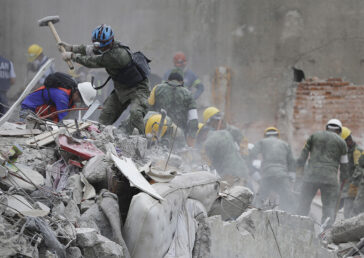 As the bitter election season winds down, a recurring theme has been the conviction among many white men that they have been losing ground in society. National writer Matt Sedensky wanted to find a way to tell their story for a concluding installment in the series Divided America.

Sedensky focused on the views of white men turning toward Republican nominee Donald Trump and rejecting Democrat Hillary Clinton. He listened to the voices on a call-in radio show in Texas _ both host and callers revealing their angst _ and then, through backgrounding interviews with them and reporting on research, showed why these men feel as they do. 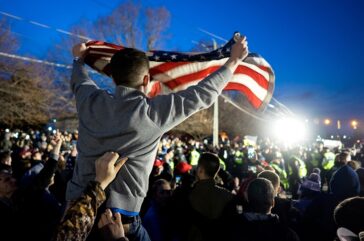 for their multi-format report on how America’s sturgeons are mounting a comeback from the edge of extinction. They not only documented the recovery of nine sturgeon species and subspecies but also provided a comprehensive look at the history of the ancient fish’s decline from pollution, dams and overfishing. https://bit.ly/2LZTpW6https://bit.ly/2YbWZ5R

for finding a woman just deported from the United States back to El Salvador, plunging her again into gang violence that had claimed two of her children. https://bit.ly/2uhWGWY

for their exclusive story that published the audio of the disturbing sound heard by American victims of the mysterious attacks in Havana. http://bit.ly/2wRAq5w

for being minutes ahead of other international news organizations with word that South Korea's president had been impeached, then following up with contextual stories no other agency had. http://bit.ly/2hsmzeG