for reporting exclusively that poaching and political opposition are hobbling the return of two species of endangered wolves and undercutting government recovery efforts that have cost more than $80 million.https://bit.ly/2YY1Vb7https://bit.ly/2Z1AddU

California at a political, cultural crossroads

for an all-formats array of California political stories, beyond the glitz and glamour, digging deep into the parts of America’s most populous state overwhelmed with poverty, high housing costs and turmoil. https://apnews.com/CaliforniaataCrossroads

Up close, personal reporting on the US political divide

wanted to explore how people on different sides of the political gulf in the U.S. view the election and transfer of power.They found two Maryland residents who represent polar political opposites: one a Trump Republican who has two TVs tuned to conservative media; the other a staunch Democrat eager for the inauguration of Joe Biden. Both are members of a program designed to bridge the nation’s extraordinary political divide.The AP team followed as the pair navigated the turbulent transition between administrations, careful to report fairly while not making their divergent positions equivalent — the journalists made it clear that the facts establish Biden’s win and do not support claims of a stolen election. The all-formats package attracted attention and yes, sparked heated discussion online. https://bit.ly/3ckElj2https://bit.ly/2Yn9r19

for shedding light on the Census Bureau’s policy of counting inmates as residents of the prison where they are held, rather than where they are actually from. Critics call it prison gerrymandering, arguing that it unfairly shifts political power and resources from urban, liberal, largely minority areas to rural, white, largely conservative areas. http://bit.ly/3562l2q

reported exclusively on Imaad Zuberi, a shadowy, elite political fundraiser whose reach included private meetings with then-Vice President Joe Biden and VIP access at Donald Trump’s inauguration. Zuberi funded political campaigns in the U.S. and sold the resulting political influence to the highest-bidding foreign government overseas.Suderman Mustian reviewed thousands of documents and interviewed more than 100 law enforcement officials, diplomats and businessmen on three continents who dealt with Zuberi during his globe-trotting years of political fundraising. Critically, Suderman persuaded his sources to turn over a trove of private emails that painted an unprecedented picture of Zuberi’s modus operandi.The reporting revealed vulnerabilities in the U.S. campaign finance system and uncovered the names of politicians who had benefited from Zuberi’s largess, prompting calls for reform. https://bit.ly/3okr64k

has kept human rights on the media agenda while covering the international Formula One auto racing series. His reporting has had impact and is now credited with helping free a political prisoner in Bahrain, site of one of the races.Paris-based Pugmire, long aware of governmental efforts at “sportswashing” in authoritarian countries hosting the series, had been one of the first journalists to press world champion Lewis Hamilton last season about jailed dissidents after discovering that Hamilton had received letters with harrowing descriptions of torture and sexual abuse by authorities in Bahrain. When an 11-year-old boy whose father is on Bahrain's death row sent Hamilton a drawing of the driver’s Mercedes race car, Pugmire had asked the driver publicly what he would do it about the case. Hamilton pledged to raise the cases with Bahraini authorities, saying the boy’s letter “really hits home.” Such questioning by reporters is rare and risky at sports events in such tightly controlled countries, but Pugmire kept at it for months.Then, this past September, an 18-year-old man was released from prison in Bahrain after being allegedly being tortured since 2019, an apparent reprisal against his family. His mother had spent more than two years in prison for criticizing the Bahrain F1 race on social media.The family’s supporters credit Pugmire’s reporting for helping lead to the release.Pugmire raised the rights issue again at the inaugural Qatar Grand Prix last week, asking Hamilton about a doctor on a 138-day hunger strike. The driver, who wore a rainbow helmet in support of LGBTQ rights in Qatar, said F1 is “duty bound” to call attention to human rights.AP’s reporting emboldened other media, including the BBC and Britain’s The Times, to follow Pugmire’s lead, questioning drivers and F1’s governing body about such issues. Pugmire won praise from a Bahraini human rights advocacy group as well as AP’s news leadership.https://aplink.news/etyhttps://aplink.news/gnghttps://aplink.news/xzehttps://aplink.news/ba9

found sources who gave detailed accounts of covert Russian military recruitment efforts — including offers of amnesty to prisoners — to make up the manpower shortage as losses mount in Ukraine.Getting anyone to speak, even off the record, about the recruitment drive has been virtually impossible. But AP’s reporter, unnamed for their security, managed to obtain access to a Russian social network group for family members of prisoners. One woman agreed to speak privately about how her boyfriend declined the offer to fight but others accepted the offer; she said eight had died in Ukraine.Another contact, the father of a soldier, corroborated reports of hundreds of Russian soldiers refusing to fight or trying to leave the military.Read more 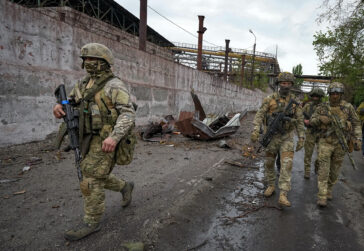 for their AP investigation that found that a company owned by a big U.S. political donor had profited by guiding dubious businesses to circumvent anti-money-laundering protections.https://bit.ly/2KEBEaxhttps://bit.ly/2AX87cp

for an APNewsBreak that uncovered an effort promoted by Sen. Bob Corker to jumpstart political dialogue in deeply polarized Venezuela. Deep source reporting by Goodman revealed secret efforts by Corker’s office to bring a Harvard-trained conflict resolution expert to Caracas for closed-door workshops with representatives of Venezuela’s socialist government and the opposition. https://bit.ly/2OMGg5m

Last year, when Beijing correspondent Gerry Shih was working on a series of stories about the Uighurs in China, he learned that a number of citizens from Kazakhstan had been ensnared in a crackdown in the Xinjiang region where Muslims were being indoctrinated in a network of internment camps.

When one of them, Omir Bekali, decided to speak out about his eight-month ordeal in detention and in a so-called re-education center where hundreds of thousands of Muslims are being indoctrinated to disavow their religion, Shih, video journalist Dake Kang and China chief photographer Ng Han Guan traveled 2,000 miles to Almaty to interview him.

Their in-depth, all-formats report on the physical and psychological torment Bekali endured earns the Beat of the Week.

Inside look at a right-wing, neo-fascist group gaining political ground in Italy

for turning exclusive access to the right-wing neo-fascist group Casapound into compelling text and video that explained why the group is gaining political ground in Italy. http://bit.ly/2xXGWJc

for back-to-back interviews with Morocco's prime minister and his top political rival for their solutions addressing rising Islamic extremism. http://wapo.st/2dNLdpG

deftly explored political conspiracy theories and those who embrace them, traveling to Wisconsin where thousands of Donald Trump’s most loyal supporters recently gathered to hear speakers, including the former president himself on video, push the lie that the 2020 election was stolen.The subject is challenging to report without bringing more attention to the conspiracies or needlessly demeaning adherents who, though deeply misguided, genuinely believe the lies that are being advanced. Yet this work is critical to understanding the political dynamics that are unfolding every day in the U.S.Colvin’s story stands out from much of the reporting on this right-wing movement because she took the time to listen — really listen — to the people who attended and to understand what motivates them to accept outlandish theories.But Colvin didn’t hold back. Rather than relying on vague adjectives or stock fact-checking paragraphs, she built a narrative that repeatedly points to concrete evidence of what actually happened in the 2020 election. Using direct and pointed language, the White House reporter makes clear that these baseless claims are completely false and part of a broader pattern of events centered on deceit. “Taken together, the gatherings have gelled into a convention circuit of delusion centered on the false premise that the election was stolen,” she wrote.The result is revealing and distinctive journalism. Brian Stelter led his widely read media newsletter with Colvin’s story, saying it “perfectly sums up this moment in politics.” https://aplink.news/gau

revealed how Michael Bloomberg built a foundation of political goodwill across the U.S. for his 2020 campaign with years of political and charitable giving. The AP team compiled data on Bloomberg’s contributions over the last six years, then cross-referenced that with the names of politicians and activists who had endorsed him to create a comprehensive look, including a localizable data distribution and graphic elements. https://bit.ly/2PR1ZHF

for landing an exclusive telephone interview with a South Carolina prison inmate who calmly confesses his role in the deaths of four fellow prisoners. https://apnews.com/f939c602fe9f40e3a33ebe78331a08e...

used a network of sources and financial records to break news on sexual harassment accusations and questionable financial practices inside the Lincoln Project, a high-powered anti-Trump organization founded by prominent Republican consultants and known for its slick, sophisticated ads attacking Trump.Relying on deep sourcing, political reporter Peoples learned that one of the Lincoln Project’s co-founders, Jeff Weaver, faced a far more expansive range of sexual harassment accusations than previously known, with some of the accusations coming from staff inside the Lincoln Project who informed senior leaders the allegations. Yet the leaders did nothing.On a separate track, Washington-based congressional reporter Slodysko dug into financial records that suggested there was a reason the Lincoln Project leadership didn’t want to shake things up: They were making a ton of money. By sifting through dozens of documents, Slodysko learned that of the $90 million the group raised, $50 million went to firms controlled by Lincoln Project leaders. The pair’s story had immediate impact. By the end of the day, the Lincoln Project announced it would hire an outside firm to review the allegations and encouraged potential victims of sexual harassment to reach out to the organization. https://bit.ly/2OIYFk9

for a daylong stakeout of a U.S. base in Japan that yielded the only live video feed of U.S. Secretary of State Mike Pompeo’s plane returning from North Korea with three freed American prisoners.https://bit.ly/2rQfx9E

for providing evidence that a political operative cooperating with the Mueller probe was involved in the secret funneling of foreign money into the U.S. political system. https://bit.ly/2pS18IR

for reporting on a lavish wine cave fundraiser for Pete Buttigieg in Napa, California, that became a key issue during the Democratic debate on Dec. 19. His curiosity piqued after a source provided him with a copy of an invitation to an exclusive Buttigieg fundraiser, Slodysko picked up details that made it clear this wasn’t just any fundraiser. The room included a chandelier with 1,500 Swarovski crystals, an onyx banquet table and $900 bottles of cabernet. The story spoke to the issue of rich donors wielding outsized political influence and dominated the week’s presidential debate as fellow candidate Elizabeth Warren pressed Buttigieg about why he would need to hold a fundraiser in such a venue. By the end of the night, “wine cave” had entered America’s political lexicon. https://bit.ly/379yVBr