for their competitive coverage of an international investment forum hosted by Saudi Arabia in a restrictive climate, amid peak interest in the Jamal Khashoggi affair.https://bit.ly/2EUDTZqhttps://bit.ly/2QhLJ0N

The disappearance and killing of Washington Post columnist Jamal Khashoggi at the Saudi Arabian consulate in Turkey has been one of the biggest, and most competitive, stories in the world this month, and the AP’s team in Turkey dominated coverage last week with its reporting surrounding a crime scene search of the consulate.

When crime scene investigators arrived at the consulate without notice on Oct. 15, Turkey news editor Ayse Wieting already had one camera fixed on the consulate door for 24-hour live coverage and quickly scrambled two more cameras with LiveU units. The AP beat the competition by more than two hours with the first edit of investigators entering the consulate.

On the text side, Ankara correspondent Suzan Fraser later got a high-level Turkish source to confirm that the consulate search turned up “evidence” that Khashoggi was killed there, a scoop that was cited across international and Turkish media.

And AP’s photo coverage of the story was also dominant, complementing the outstanding the video and text efforts. Photographers worked hard to find new angles on a visually challenging story, where often the only visible activity was people walking in and out of a building.

For impressive efforts and ingenuity in covering a worldwide top story of paramount importance to AP members and customers in all formats, the AP team earns Best of the Week honors. 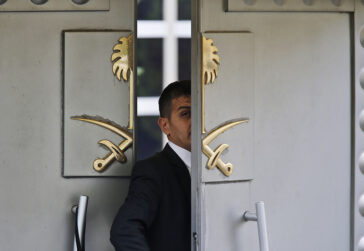