for reporting exclusively that Homeland Security officials deciding whether 50,000 Haitians should be allowed to remain in the U.S. searched for evidence of criminal conduct and other misdeeds. The decision is supposed to be based on living conditions in their home country. https://apnews.com/740ed5b40ce84bb398c82c48884be61...

AP has rare access as Haitian migrants, in bid to reach US, face perilous jungle crossing of Darien Gap

Hundreds of migrants try each day to cross the Darien Gap — a thick jungle between Colombia and Panama traversed by many ultimately seeking the U.S. border — yet journalists rarely observe more than the first few steps of the journey.

But after days of negotiations with locals who participate in a human-trafficking network, the Bogota-based all-formats team of correspondent Astrid Suárez, photographer Fernando Vergara and video journalist Marko Álvarez were given exclusive access to the first hour of a treacherous six-day journey. That single hour was enough to tell the stories of migrants willing to risk their lives in a jungle teeming with threats, from raging rivers to gangs targeting migrants for theft and sexual assault.

For a stark all-formats portrait of desperation and determination in the depths of the jungle, Suárez, Vergara and Álvarez earn AP’s Best of the Week — First Winner.

delivered exclusive all-formats coverage as a single dilapidated vessel that set out for the United States carrying 842 Haitians landed instead on the coast of central Cuba. The migrants, who had been abandoned at sea, appeared to be the largest group yet in a swelling exodus of people fleeing widespread gang violence and instability in Haiti.Video journalist Gonzalez and photographer Espinosa captured images that showed the distress and fatigue in the faces of the migrants, some of them women with small children and even a newborn baby. Producer Duran was instrumental in working with the Cuban authorities and medical team to get unrestricted access to the migrants while feeding information and interviews to Rodriguez, who crafted the text story in Havana.Read more

AP journalists in three countries had already dominated coverage of the thousands of mostly Haitian asylum seekers who converged on a U.S.-Mexico border encampment when AP had yet another scoop: Despite Biden administration rhetoric, many, if not most, of the migrants were staying at least temporarily in the U.S. under an increasingly chaotic U.S. asylum system.

What followed was another week of outstanding and indefatigable all-formats AP coverage and collaboration, with a steady stream of breaking news and distinctive enterprise, from spot developments at the border, to the Latin American roots of the Haitian surge, to deportees arriving in Haiti amid chaos and violence in a country they barely recognize.

All of it delivered with visuals that brought the stories to life and drove news cycles.

For sweeping, collaborative, win-each-day coverage that earned praise from customers and colleagues alike, this team of more than two dozen journalists, in collaboration across desks and formats, is AP’s Best of Week — First Winner.

teamed up to vividly illustrate why environmental work is emerging as one of the world’s most dangerous professions, as seen through the lens of one such worker in Haiti. In 2020 alone, a record 227 environmental workers were killed globally, according to one human rights organization.Daniel reported from New York while Haiti video journalist Luxama and his colleague, photographer Joseph, followed marine biologist Jean Wiener during a rare trip to his native Haiti. Wiener has been forced to do most of his conservation work from afar because of rampant violence in his homeland.With tight collaboration between AP departments and bureaus, the compelling package of text and visuals transports readers to the ominously named Massacre River as Wiener confronts climate change in a poor nation hit hard by global warming — and violence.Read more 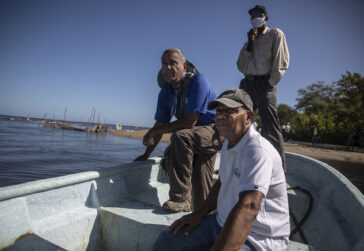