worked sources to report exclusively that criminal charges would be filed against former Michigan Gov. Rick Snyder and others in the Flint water crisis, one of the worst human-made environmental disasters in U.S. history.White was reporting an unrelated story when he asked a source about any developments in the Flint investigation. That paid off with a tip — confirmed with a second source by Eggert — about the imminent charges.The bombshell exclusive hit a full two days before the official announcement and was AP’s most-used story by customers online that day, widely credited by local and national news outlets, including the Detroit Free Press and the New York Times. https://bit.ly/35T67z6 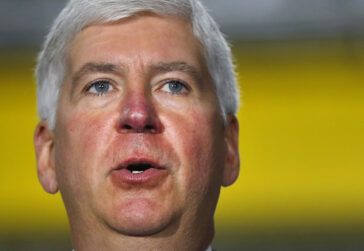 Flint water case could hinge in part on misconduct charges

for being the first to report that misconduct in office charges against eight current and former employees in the Flint water crisis ... http://wapo.st/2bH9Z8D

for breaking the news that the state Health and Human Services director was being charged with manslaughter in a death attributed to the Flint lead-water crisis. http://trib.in/2t0F2b2

for being first to report that authorities investigating Flint’s water crisis used search warrants to look at the state-owned mobile devices and computers of former Gov. Rick Snyder as well as those of other state employees. https://bit.ly/2XJ8mPj

or being first to report that Flint’s water system is no longer exceeding the federal limit for lead, more than 15 months after the city’s water crisis exploded. http://bit.ly/2jCDuMn

for revealing that Republicans on a U.S. House committee had quietly ended the congressional investigation into the Flint water crisis. http://bit.ly/2hWi0fz

reported exclusively on a California water district — home to Kim Kardashian and other celebrities — that may have the state’s harshest water restrictions during the current drought.The Las Virgenes Municipal Water District, just north of Los Angeles, is among districts that rely almost exclusively on state water supplies. Ronayne, Sacramento-based environment/climate reporter, learned of the district’s new penalties for water wasters while reporting that in the midst of drought, local districts may not get any of the state water supply they’d requested in 2022. She decided to find out more, reasoning that what’s being imposed in Las Virgenes may serve as a model for other water districts as the drought continues.When Las Virgenes officials explained they would slow water flow to a trickle for households that keep wasting, Ronayne knew she had a story. With further reporting, she confirmed that the district's conservation tactics went further than others.Ronayne’s exclusive on the district’s approach hooked AP customers and readers, partly because Las Virgenes serves celebrity-filled neighborhoods. District officials said many rich residents don't bother to cut back when fined; water isn't an expensive commodity for them and the penalties aren’t significant — until the water slows to a trickle. https://aplink.news/1dv

reported for all formats and collaborated with colleagues on a richly produced enterprise package that explores an important environmental concern linked to climate change: the effect of wildfires on water supply, particularly in the U.S. West where the fires are becoming more frequent and destructive.Denver-based videojournalist Peterson focused on a female climate scientist, a relative rarity in the field, and how her work might help local water managers guide decisions amid increasing water shortages which will only get worse in years to come.With strong visuals and an engaging presentation, the package resonated with customers and readers, was used by dozens and dozens of websites and papers, and racked up some 2 million pageviews on AP’s Facebook page alone.Read more

Lead crisis in housing project was actually no surprise

The down-at-the-heels industrial city of East Chicago, Indiana, made headlines around the world in August after the mayor ordered 1,000 people to get out of a 40-year-old public-housing complex because of lead contamination.

Many residents and observers expressed surprise: How could such a problem go overlooked for so many decades?

The Chicago bureau’s Sara Burnett and Jason Keyser teamed up for several weeks of intensive document and street reporting. What they found was as disturbing as the original news: The hazard shouldn't have been a surprise to anyone – because the housing complex had been built on the former site of a lead-products factory.

for illustrating the largely underreported problem of discarded needles from the opioid crisis turning up in rivers, on beaches and in public parks across the country. http://bit.ly/2v5VKqX

produced a distinctive, exclusive investigative story using data analysis and deep reporting to reveal that many Venezuelan children lack access to essential vaccines, putting the country among the world’s worst for inoculating children against potentially fatal diseases and leaving neighboring countries vulnerable to outbreaks.Data on vaccination rates is elusive in Venezuela, where institutions are shrouded in secrecy, corruption and bureaucracy. The country hasn’t published rates since 2015. But Garcia Cano, Caracas-based Andes correspondent, obtained rare government data from a source, as well as estimates from public health agencies, showing the vaccination crisis is growing.She also visited clinics, spoke with families and interviewed public health experts for a comprehensive look at the availability of vaccines in Venezuela’s unraveling health-care system.Read more 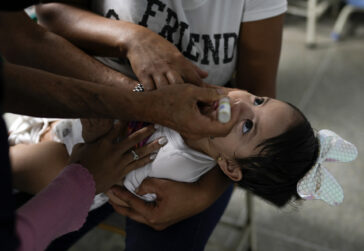 for combing through water pollution reports posted by hundreds of utilities to reveal the scope of contamination from the dumping of coal ash from power plants into man-made ponds and landfills. http://bit.ly/2FpCHci

exposed a growing housing crisis hitting college campuses across the U.S.: A surge in the number of new students who deferred college during the worst of the COVID crisis has strained campus housing nationwide, leaving many students homeless, sleeping in cars or living in motel rooms while attending school — or causing them to further delay their education.Working with AP’s housing coverage team, San Francisco reporter Har found that while the college housing crunch may be most acute in California, it impacts college students nationwide.With video from Terry Chea and photos by Eric Risberg, digital storyteller Samantha Shotzbarger created a strong presentation that performed well both on AP platforms and with customers, but its real impact was on Facebook, where it was viewed 2.4 million times.Read more

for using his expertise on the Supreme Court beat to quickly find a gem in the massive dump of documents about Supreme Court nominee Brett Kavanaugh: that Kavanaugh had questioned the high court’s ruling that led to the end of Nixon's presidency. https://bit.ly/2Ac10fY

for giving readers the first word on two key decisions by Pennsylvania’s governor as he combats a budget crisis: a prison closing and the consolidation of four government agencies. http://bit.ly/2jKDTyQ

for revealing that the Gulf diplomatic crisis prompted FIFA to remove a Qatari referee from a 2018 World Cup qualifier following a request from the United Arab Emirates. http://trib.in/2sc40Dr

for an all-formats effort to tell a little-noticed story of the opioid crisis – how clergy members have become first responders, of sorts, leaving their pulpits to go directly to the streets to help get people into treatment and on a path to recovery. https://bit.ly/2BqB2E6

teamed up on an all-formats package that used two Oregon carrot seed farmers, living just miles apart, to illustrate the deep inequities of water distribution amid crippling drought. The contrast between the two farm fields — one a virtual desert, while a short distance away sprinklers douse crops and cattle graze on green grass — illustrates the arcane water allocation rules determining who will wither and who will thrive amid the ongoing drought in the American West.Using this striking example, the journalists explored how farmers, out of necessity, are considering proposals to set up water banks that use the supply and demand principles of the free market to funnel scarce water where it’s needed most while encouraging conservation. But the concept also brings risk and resistance.Flaccus reported on the ground in and around Madras, Oregon, and shot video, while Peterson reported from Denver and produced the video, which featured Howard’s striking photos and drone footage of the drought’s impact. Top Stories Desk photo editor Alyssa Goodman in New York drew all the elements together in an engaging presentation that saw remarkable play in the West and beyond.https://aplink.news/a4uhttps://aplink.video/k19

Lead crisis in housing project was actually no surprise

for combining an exhaustive document dive with gum-shoe work to tell the story behind the sudden order by the mayor of East Chicago, Indiana, to remove more than 1,000 residents from their housing project because of lead contamination blamed on years of neglect. http://trib.in/2d6Jpeu