for her APNewsBreak detailing how money intended to make sure fish was safe to eat following the BP oil spill instead went to things like iPads, cameras and now-missing fishing equipment. http://apne.ws/2dlSaAR

Committed coverage pays off with exclusive on predator fish

landed an exclusive on an emerging threat to an endangered fish a few weeks after leading a large, visually rich package on conservationists’ efforts to protect the humpback chub on the Colorado River. The species, endemic to the Colorado, is threatened by non-native predator fish due to the effects of climate change.Peterson’s commitment and strength of her work led directly to a scoop a few weeks later when an official reached out only to her with the news scientists had feared: Non-native predator fish had made their way into waters inhabited by the humpback chub.The fate of the species is something periodically covered by many news organizations but this scoop on the presence of predators, particularly smallmouth bass, went unmatched. The story played widely with customers and was second overall for pageviews on AP News the day it moved.Read more 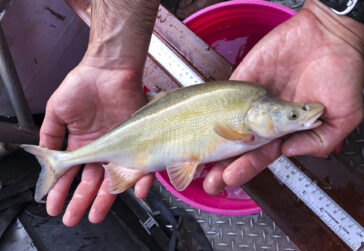