The erosion of hope: Kathy Gannon on 35 years in Afghanistan

is an AP icon — she has had an unsurpassed view on the ground in Afghanistan for the past 35 years. So when an editor suggested she write a first-person piece reflecting on her decades of coverage, she stepped up with a vivid and intimate retrospective.The story, full of personal anecdotes, brings Afghanistan's recent history to light, tracking the country’s slow descent into despair. The pacing is such that the piece reads like a narrative, leading with the 2014 shooting that seriously injured Gannon and killed a beloved colleague, then taking the reader effortlessly through the country’s conflicts and shifting regimes. Like everything she writes, the piece focuses squarely on the people of Afghanistan, conveying Gannon’s respect for their kindness and resilience, even as hope fades.Read more 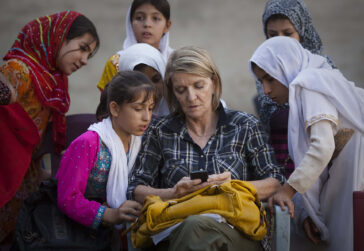 reported from the ground, the water and from the air to document the impact of climate change and land loss on the vanishing island breeding grounds of Louisiana’s brown pelicans, as well as the people and other wildlife that depend on this coastal ecosystem.After obtaining permission to visit the off-limits barrier islands, the all-formats trio revealed in words and striking visuals the effects of erosion and sea level rise on the coastal habitat and Louisiana’s saltwater marshes, and what remains to be lost: Louisiana’s state bird, the brown pelican, brought back over decades from the edge of extinction.Read more

definitively examined, from six continents and in all formats, the impact of climate change, merging the science behind a major — and sobering — United Nations report with the voices of people who are living it.Weeks before the Feb. 28 release, climate news director Peter Prengaman, reporters Seth Borenstein and Frank Jordans, both veterans of climate coverage, and Stockholm-based video journalist David Keyton brainstormed the plan, putting AP’s global footprint to use: Instead of just one big, all-formats story — the norm for previous reports by the Intergovernmental Panel on Climate Change — AP would use the report as a jumping-off point to explore the state of climate change from each continent. Read more

Standout visuals mark a year since eruption in Philippines

had a vision for a visually-driven package to mark the year since the violent eruption of the Taal volcano in the Philippines.With his newly acquired drone pilot license, the Manila-based AP photographer knew that aerial photography would make unique still and video images of the ash-covered ghost town. He also learned that many residents of the volcanic island still remained homeless in a temporary tent city.After getting approval for the project, he set out to deliver all-formats coverage. He did extensive research, then drove to the volcano, where a local fisherman ferried him to the island that is home to the volcano.The drone app warned him it was too windy to fly, but Favila knew the visuals would be strong — and it might be his only chance. He launched the drone and kept receiving strong wind warnings during the flight, but he kept the drone airborne long enough to get stunning photos and video.Next, he explored the ash-covered island, visiting an area where people still live in tents. Residents of the island, which is a popular tourist destination, lost their livelihood: livestock animals and the farmland where they grow vegetables. Favila interviewed people who have had to live in the tents through typhoons, excessive heat and even the pandemic, capturing their touching accounts on video, humanizing the story for an impressive one-person package.https://bit.ly/35At6yLhttps://bit.ly/3bIsUB4https://bit.ly/38DyX8a