Only on AP: 20 years later, chaplain’s litany of prayers for US troops killed in Afghanistan finally comes to an end

With the end of the war in Afghanistan looming, national writer Matt Sedensky sought a compelling way to humanize America’s longest war — and he found it. Nearly all the American troops killed in the war had their remains returned to Dover Air Force Base in Delaware, where the military runs a mortuary. There, Sedensky found chaplain David Sparks, who had been called to active duty after 9/11, assigned to the mortuary, and had been there ever since.

Sedensky pieced together Sparks’ experience: writing hundreds of prayers for the dead, standing beside their disfigured remains and ministering to their broken families. Joined by New York video journalist Jessie Wardarski and Washington photographer Carolyn Kaster, the team had access to parts of the base hidden far from public view. The resulting package, with Sedensky’s expressive prose and affecting visuals by Wardarski and Kaster, generated a strong response from veterans and non-military alike.

For intimate, revealing work that eloquently writes one of the closing chapters of America’s 20-year war, the team of Sedensky, Kaster and Wardarski earns this week’s Best of the States award.

The idea for this deeply reported story emerged months ago when AP noticed Ukrainian refugees being sent to Russia — then disappearing.

The process was painstaking, but AP spoke with 36 Ukrainians, most of them from the devastated city of Mariupol, all of whom were sent to Russia. Some had made their way to other countries, but almost a dozen were still in Russia, an important find. The refugees’ personal stories humanized the larger findings of the investigation: Ukrainian civilians have indeed been forced into Russia, subjected along the way to human rights abuses, from interrogation to being yanked aside and never seen again.

The story was widely used and cited by other news organizations, and a week after it ran it was still near the top for AP reader engagement.

For teamwork across borders that resulted in the most extensive and revealing investigation yet into the forcible transfers of Ukrainian refugees, the team of Lori Hinnant, Vasilisa Stepanenko, Cara Anna, Sara El Deeb and colleagues in Russia and Georgia earns AP’s Best of the Week — First Winner.

Italie set off to get the news on the wire quickly, while also alerting colleagues. That included entertainment writer Mark Kennedy who had met Tyson years earlier. Kennedy had decided that when the time came, the AP obituary would have to capture the breadth and achievement of her life and career. And he had prepared just that.

The AP story moved at least 15 minutes before other outlets, earning more than 265,000 page views and front page headlines.

Celebrity obituaries are intensely competitive; Italie and Kennedy kept AP well in front, through source work, commitment and solid preparation. For that, they win AP’s Best of the Week award.

APNewsBreak: Despite denials, US shares terror watchlist with private sector

For years, the federal government has denied widely sharing its terrorist watchlist with the private sector. But American Muslims have long had suspicions to the contrary, as those mistakenly placed on the list faced everyday difficulties ranging from making electronic bank transfers to boarding airplanes.

Source building and careful document review by Northern Virginia correspondent Matthew Barakat finally revealed that the federal government shares its terrorist watchlist with more than 1,400 private entities, including hospitals and universities. The government’s acknowledgement of the practice, buried in a civil lawsuit, was significant because officials have repeatedly denied that the list was given to private groups. Barakat’s sources and his thorough coverage of the 2-year-old case had him ready to jump on the filing as soon as it became public.

His APNewsBreak on Feb. 19 earned wide attention, including hundreds of members using the story. Others scrambled to catch up, with The Washington Post crediting AP for breaking the story when it ran its own version in the paper.

Over the next two days Barakat was also first to report on a call for a congressional probe, and he was the only reporter in court when a federal judge berated government lawyers, ordering them to disclose the private sector entities to the lawsuit’s plaintiffs.

For his methodical document work and source-building that helped hold the federal government accountable, Barakat wins this week’s Best of the States award. 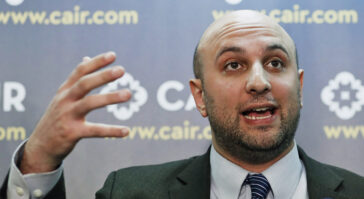 A face transplant: It’s one of the rarest of surgeries, a medically complex, emotionally fraught procedure – and a challenge to cover as a truly revealing news story and not just a sensational headline.

That’s why AP National Writer Sharon Cohen’s narrative of the first face transplant performed at the renowned Mayo Clinic was so remarkable, combining detailed reporting on state-of-the-art medical science with a unique tragedy-to-triumph human story. The narrative, Andy’s New Face, which engaged readers and commanded front pages for days after its release, earns the Beat of the Week.