for an exclusive look at a number of investigations under way in Brazil into offshoots of the U.S.-based World of Faith Fellowship sect. http://bit.ly/2yA7a6U

for breaking the news of the birth of the Clooney twins at least a couple of minutes before anybody else, a clear beat on one of the most anticipated celebrity baby births in years. http://apne.ws/2rejy6o

for revealing that part of the Trail of Tears National Historic Trail had been damaged by the Forest Service, which two years earlier had touted the purchase of the property as a way to protect land considered sacred by native Americans. http://bit.ly/2d45rLg

for beating a highly competitive field to break the news that the Chicago Police Department would hire more than 500 new officers ... http://bit.ly/2dtdGnf

for the first interview with the Minnesota police chief after one of his officers shot and killed a black motorist during a traffic stop. http://apne.ws/2bgNOVN

When the Helena Police Department cited the statute of limitations in declining to bring charges against Montana Secretary of State Corey Stapleton for misuse of a state-owned vehicle, Helena reporter Amy Hanson dug deeper.

After multiple public-records requests Hanson found that Secretary of State Corey Stapleton traveled tens of thousands of miles more than what had been previously reported, including many times when he had no official events on his calendar. And she found that the misuse continued until he turned in the vehicle in March, well within the statute of limitations.

For determined reporting that resulted in a textbook example of accountability journalism, Amy Hanson wins this week’s Best of the States award.

for their all-formats coverage of the discovery of the stern of the USS Abner Read, a destroyer sunk off the coast of Alaska in 1943. https://bit.ly/2Mwnk9F

shed light on one of the world’s most obscure conflicts with all-formats coverage of the fighting between Morocco and the Polisario Front, which seeks independence for the Sahrawi people in the disputed territory of Western Sahara. The flare-up in the conflict, after nearly 30 years of cease-fire, is fueled by new generations of Sahrawi refugees who believe that the wait for a referendum on self-determination, as promised by the United Nations, has only worked to Morocco's benefit while they languished in unforgiving desert camps.AP photographer Armangue and his Madrid colleague, chief correspondent Parra, spent a week with the rebel movement, providing a rare glimpse of rebel rocket and artillery positions, as well as life inside Polisario refugee camps in neighboring Algeria.https://aplink.news/a4whttps://aplink.video/gf6https://aplink.photos/w8p

Despite challenges, strong coverage of Turkish offensive into Syria

for overcoming major obstacles to cover Turkey’s offensive into northern Syria, including disruptions of communications networks, hostility to international media and sporadic shelling. The pair provided powerful visual coverage of the military buildup on the Turkish side of the border, early scenes of troops crossing into Syria and a live shot of the border and the chaotic scene of a mortar attack in the Turkish town of Akcakale. Strong contributions from Beirut rounded out the coverage.https://bit.ly/33ehnCehttps://bit.ly/2MRpii9https://bit.ly/2nZnH1y

The Class of 2020: Stories of resilience amid crises

produced in text and video a compelling look at members of America’s high school Class of 2020, focusing on eventful lives shaped by a series of crises.

Irvine, collaborating with colleague Stephanie Mullen, set out to tell the story of a generation born in the aftermath of Sept. 11 that has faced a number of challenges – from the loss of a parent to wildfires and hurricanes, the Great Recession and, most recently, a pandemic and civil unrest over police brutality.

The result was a multiformat package with stunning portraits and a print story that took the reader through the graduates’ stories in order of the events that have impacted them. Irvine also produced a video that featured several photos interspersed with self-shot video of three of the graduates.https://bit.ly/37jR80ihttps://bit.ly/3cTBASh

for breaking the news that Baton Rouge’s police chief was firing the police officer who shot and killed Alton Sterling and suspending the other officer involved in the deadly confrontation.https://bit.ly/2uPQ9FN

for an exclusive story confirming rumors that had been circulating for weeks that Jordan was deporting record numbers of Syrian refugees. https://apnews.com/6026c216fbfa4073b7ef57ec1514809...

In the face of death, the party of a lifetime

In a world focused on life and survival, death is often unseen, endured in private and acknowledged in glowing obituaries or tragic news stories. It’s also mostly out of the control of the person who is dying.

Seattle Photographer Elaine Thompson has long wanted to show the real, personal side of what often comes across as an impersonal process. She spent months looking for the right subject, getting tantalizingly close to success before plans fell through. She stuck with it, and when she found Bob Fuller, she enlisted reporter Gene Johnson to tell his story.

This week’s Best of the Week goes to the team of Elaine Thompson and Gene Johnson who chronicled how one man, in the face of death, created the party of a lifetime.

for putting AP ahead by reporting the specific wording of the U.S. Department of Justice's rollback of guidelines that originally were aimed at reducing the imprisonment of nonviolent offenders. https://apnews.com/e72e3fe1fc2d4108a249710e8f9097c...

Persistence pays off with story of bureaucrat blocking transition

wanted to know more about Emily Murphy, the little-known federal official who stalled the formal presidential transition by waiting more than two weeks to “ascertain” that Joe Biden was the apparent winner of the presidential race.Madhani reached out to every recent administrator of Muphy’s agency — the General Services Administration — as well as some lawmakers Murphy had worked for, but he wasn’t having any luck. His 10th call, a fortuitous cold call to Dave Barram, who ran the GSA during the Bush-Gore standoff in 2000, proved to be the jackpot. Madhani found Barram’s number in an online database.Barram revealed that he’d spoken with Murphy before the election to talk through how to handle ascertainment. He laid out his advice to her: “If you do the right thing, then all you have to do is live with the consequences of it.’”The call with Barram didn’t occur until late in the day, but Madhani instantly knew he had a story. He worked late to turn it around for AP’s most reader-engaged story of the day. https://bit.ly/32YG5ZQ 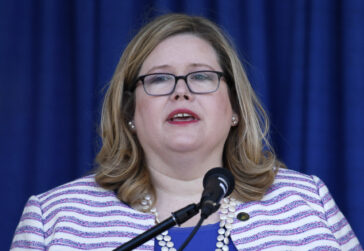 for getting hold of a report from the Department of Homeland Security’s intelligence arm that concluded citizenship was an inadequate indicator to use for a travel ban to keep out people who may pose a threat of violent attacks. http://trib.in/2kVAsaO

David Klepper, statehouse reporter, Albany, NY, for obtaining details of a disabled man in a state group home who was twice infested with maggots near his breathing tube, offering a rare glimpse into investigations in state-regulated institutions for the disabled, addicted and mentally ill. http://abcn.ws/2w1NU1P

Thousands of Migrants Are Rescued Off the Libyan Coast

for striking images and stories of migrants from a two-week embed on a rescue ship operated by a Spanish volunteer group. http://nyti.ms/2c0ZZIF

The thousands of refugees spilling over the border into Sudan from Ethiopia’s Tigray region are some of the only firsthand witnesses to a worsening conflict that remains out of reach for most of the world’s media. Crossing a remote desert area, they recount ethnic-targeted killings, many fleeing at a moment’s notice and leaving loved ones behind amid an offensive by the Ethiopian government against Tigray separatists.

Video journalist Fay Abuelgasim and photographer Nariman el-Mofty have put individual faces on the complex story since arriving at the Sudan-Ethiopia border area nearly two weeks ago. Along with reporters Sam Magdy in Cairo and Cara Anna in Nairobi, their work has revealed the human toll of a conflict to which access remains tightly restricted, even as the United Nations warns of possible war crimes. AP clients have recognized the work with strong play.

For their determined, resourceful and revealing work to document the individual struggles of an escalating refugee crisis, Abuelgasim, el-Mofty, Anna and Magdy earn AP’s Best of the Week award.

Assassination of the Russian Ambassador

On his way home, AP photographer Burhan Ozbilici stopped at the opening of a photo exhibit at Ankara’s Contemporary Arts Center. The Russian ambassador to Turkey was to speak, and Ozbilici figured the AP could use images of the envoy for its archives.

Shockingly, Ozbilici instead found himself a witness to an assassination. With cool head and steady hands, he documented the killing of Ambassador Andrei Karlov, capturing some of the most astonishing images of this or any other year. His photo of the raging gunman _ one hand holding the gun, the other pointed to the ceiling, his lifeless victim on the floor _ would appear on countless front pages and broadcasts and websites. Within hours, it was seen by some 18 million people on Facebook alone.

Even in a year of remarkable work by AP staffers, Ozbilici’s photos and actions were extraordinary _ and richly deserving of the final Beat of the Week award of 2016.