You know your scoop has touched a nerve when it gets tweeted by both Ann Coulter and Chelsea Clinton.

Such was the case with Colleen Long’s multiplatform APNewsBreak that the U.S. approved thousands of requests by men to have their child or adolescent brides admitted to the United States. The story not only pointed to problems in immigration law, but also lax state laws that make immigration by child brides possible.

The story started with a tip from Ron Nixon, AP’s new international investigations editor, who had been told by a source that data requested by the Senate Homeland Security Committee would be startling.

Nixon passed the information to Long, the Washington-based homeland security reporter, who persuaded committee staff to give her the story exclusively. She also went beyond the striking data to give readers a sense of how the issue affects women’s lives, speaking with women who had been married as children. A compelling video accompanied the piece.

On a busy news day, the story was one of AP’s most widely used, fronting many news websites and posted to Facebook by multiple news organizations. The video piece also had a strong showing, receiving thousands of YouTube streams and 27 customer downloads.

For revealing a little-known loophole in immigration policy that raises concerns over security and exploitation, and for connecting the data to women victimized by the policy, Colleen Long wins this week’s Best of the AP. 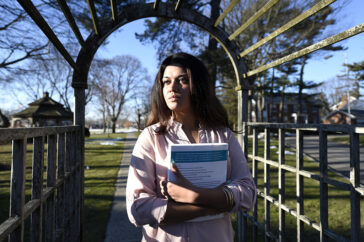 When Mexico announced in August that its 30 million students would start the school year using a combination of internet and television-based distance learning, many poor families chose to send their children to work to help survive the pandemic’s economic toll.

With tens of millions of out-of-school children worldwide, AP decided to look at this sad phenomenon on a broad level, from Latin America, where children hammered away inside amber mines or labored in brick kilns, to Kenya where girls had been forced into prostitution while others broke rocks in a quarry.

for accompanying Filipino police on a raid that exposed the relatively new and rapidly spreading crime of Webcam child sex abuse. https://apnews.com/74b81f79e9024124a1cfe43a0ce9eec...

for their vivid reconstruction of a massacre of dozens of Rohingya Muslims in Myanmar. http://bit.ly/2F3x83x 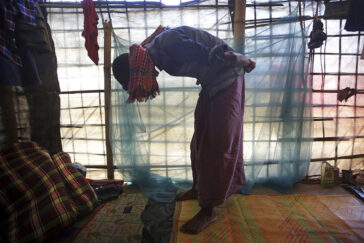 teamed up on an exclusive package that revealed concerns over racial disparity in an algorithm used by one child welfare agency to help decide if a family should be investigated by child protective services.Long-term source work allowed the reporters to obtain research on the impact of the tool used to support social workers in Allegheny County, Pennsylvania, who make split-second decisions meant to protect children from neglect. The research showed the algorithm flagging a disproportionate number of Black children for a “mandatory” neglect investigation when compared with white children, and that social workers disagreed with the risk scores the tool produced about one-third of the time.Read more

The approach to Vatican Correspondent Nicole Winfield came from a member of a task force that had investigated care at Italy’s foremost pediatric facility, known as “the pope’s hospital.” The contact feared that serious concerns raised by the task force hadn’t been addressed two years later.

That tip, in late 2015, set the AP on a 20-month investigation of the Bambino Gesu (Baby Jesus) Pediatric Hospital. Winfield teamed up with London-based Medical Writer Maria Cheng to reveal a dark chapter in the facility's history. They found that children sometimes paid the price as administrators tried to make the money-losing enterprise turn a profit, and Vatican officials took pains to keep the concerns quiet.

Their work earns the Beat of the Week. 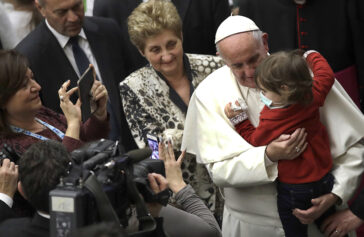 for an all-formats exclusive that documented the reunion of a child soldier and his mother years after she grieved his reported battlefield death. http://bit.ly/2uvyaSP

for building on their previous reporting about the Brothers Home, where some of the worst human rights atrocities in modern South Korean history had taken place. Kim and Klug have now revealed that the notorious facility was part of an orphanage pipeline feeding the demand of private adoption agencies. A former U.S. diplomat specializing in the Koreas said the story shows “The AP continues to be second to none in South Korea-based investigative reporting.” https://bit.ly/2KkAe7C

Through the eyes of children: The pandemic and beyond

collaborated on a multinational project, talking to kids about living with the coronavirus and asking them to use art to show what they believe the future might hold. Some sketched or painted, while others sang, danced ballet or built with LEGOs. A few just wanted to talk. The video interviews, story and photos, along with the kids’ art and a masterful presentation on AP News – brought their stories to the world in an intimate, engaging package.https://bit.ly/3cBzRAMhttps://bit.ly/2A4kOCr 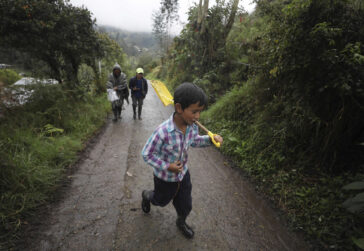 AP scoop on US ruling to free immigrant children

scored a 90-minute beat on a closely watched federal court ruling that ordered the release of children held with their parents in U.S. immigration jails during the pandemic. Merchant was tipped earlier in the day and had much of the story written ahead of the decision. He had set the stage earlier in the week with an unmatched story on families being isolated in Texas at the largest of three family detention centers run by U.S. Immigration and Customs Enforcement. https://bit.ly/3iclNlv

for breaking the news that the U.S. government held a record 69,550 infants, children and teenagers in custody over the past year, published as part of a collaboration with PBS’s “Frontline.” The story and documentary were the result of a collaboration initiated by Burke and led by international investigative editor Ron Nixon. The joint project built on years of Burke’s work with Mendoza and many colleagues on the immigration beat team and in Latin America. Together, they contniued to press for access inside shelters, interview kids who had been detained, document the trauma risks, and garner interviews with officials responsible for the situation.https://bit.ly/35oq9yBhttps://bit.ly/2O5k4kKhttps://to.pbs.org/2s3fStf

A true multiformat team of AP journalists produced this Only on AP piece by tracking down data on child abuse from every state to reveal a worrying trend: Reports of abuse are down while signs of severity are up. The team complemented that dogged data work and hard news with the tragic story of one girl who fell through the cracks during the pandemic.

For exposing another disturbing inequality stemming from the pandemic, Ho and colleagues Valdes, Fassett, Rourke, Slocum and Martin share this week’s Best of the States award. 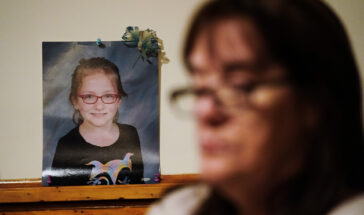 for an exclusive story revealing that a county welfare agency had been using illegal custody agreements for years to remove children from parents under duress and sometimes without cause. https://bit.ly/2GgTpyr

for spending months tracking down an official list of 629 poor Pakistani girls and women trafficked as brides to China. The story provided the first concrete evidence of the scale of China’s trafficking of brides, many of whom are sold into prostitution, physically and sexually abused, or forced to undergo fertility treatments. https://bit.ly/2M4QI4T

An accidental shooting kills a child every other day

The tragic stories pop up frequently in local media: a curious toddler gets hold of a gun and accidentally shoots himself or someone else. But how often does that happen? Under what circumstances? And what children are most at risk?

In a new investigative partnership, a team of reporters from the AP and USA TODAY Network spent six months seeking answers to those questions and others about accidental shootings involving minors. What they discovered is horrifying: A child dies every other day of an accidental shooting in the United States. What's more, the federal government significantly undercounts the problem.

for exposing how government officials are being accused of diverting food aid from camps for people who fled Boko Haram extremists, leading to a high number of starving children.

When San Francisco-based data reporter Camille Fassett obtained a national dataset on police use of force, she and Washington-based law enforcement team leader Colleen Long pored over the numbers, looking for a new angle on the well-trod issue. Then investigative fellow Helen Wieffering hit on something — the data included numerous instances of force used against teens and kids.

Looking closer, what they found was stunning: 3,000 cases over 11 years where police used force against children, some as young as 6.

To put faces and voices to the numbers, the reporters spent months interviewing children, teens and parents. The team also secured police body camera footage that backed up the stories. The resulting package was a remarkable all-formats look at how Black and brown children are disproportionately affected by police force.For a deeply reported story that explores a little-recognized aspect of police use of force, the team of Fassett, Long and Wieffering is AP’s Best of the Week — First Winner.

for delving into the world of intersex children by winning the trust of a family to tell of their struggles and triumphs in raising two such children who share male and female traits. The all-formats package brought understanding of a condition unfamiliar to most people, and perhaps empathy for the family’s children, as well as a conflicted father and a mother who wants to share her learned experience.https://bit.ly/2WJtKrahttps://bit.ly/2RgOmkC

As the ranks of dioceses promising to release lists of priests credibly accused of sexual abuse began to mushroom at the beginning of this year, Philadelphia reporter Claudia Lauer and Washington-based data editor Meghan Hoyer started to strategize: How could they leverage the information on a scale never before accomplished?

After months of systematic, dogged work, the result was “Where Are They Now,” a blockbuster investigation that found almost 1,700 priests and other clergy members living with little to no oversight, many with positions giving them access to children. Dozens have committed crimes, including sexual assault.

The story received exceptional play online and in print, and AP Managing Editor Brian Carovillano called it, “One of the most monumental pieces of AP journalism in my memory.”

For a stunning investigation that breaks new ground in the already impressive body of work that is “The Reckoning” series, Lauer and Hoyer win this week’s Best of the States award.