delivered two compelling stories far from the hermetically sealed and officially sanctioned Olympic bubble, focusing on marginalized people in Chinese society and official efforts to suppress unflattering media.Resourceful reporting by Kang and McNeil revealed the success of Chinese government efforts to subdue unrest in Tibet, the site of violent protests during the 2008 Summer Games hosted by China.And Wu reported the story of a chained woman 500 miles from Beijing who was shown in a viral video with a chain around her neck, her circumstances unclear. Chinese authorities tried to block the video but Wu revealed another side of China, where creative netizens stay one step ahead of the censors to keep injustices from obscurity.AP’s Tibet story was unmatched in any format. Other Chinese and foreign outlets covered the chained woman story, but not with the depth and detail of AP. Read more 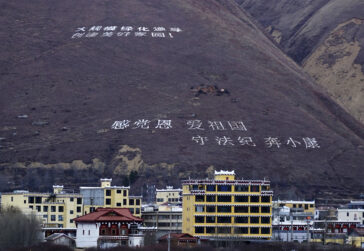 Through 78 days at Walt Disney World, basketball writer Tim Reynolds proved himself virtually unstoppable, turning out game stories on deadline while also spinning insightful pieces that examined the major topics of 2020, from coronavirus concerns to racial injustice issues and the presidential election – not to mention the league’s work stoppage. The so-called bubble may have confined him to an arena in central Florida, but Reynolds’ relentless NBA coverage reminded readers that sports illuminate our lives in ways big and small.

In all, Reynolds wrote an eye-popping 200-plus stories, collecting exclusives along the way. He capped his efforts with his insightful analysis of LeBron James’ legacy after James led the Lakers to their record-tying 17th NBA title.

For his exhaustive, and exhausting, work that went well beyond the games in the NBA bubble, Reynolds wins this week’s Best of the States award.

teamed up to break news from the NBA’s “Disney bubble” as teams suspended play over racial justice issues. Reynolds got the only on-the-record interview with an executive board member of the National Basketball Players Association, speaking with Andre Iguodala on the day that players decided that they would remain isolated at Walt Disney World and continue the postseason despite the protests.

The interview followed Reynolds’ scoop that the NBA’s owners had called an emergency meeting and that a three-hour meeting between players and coaches led to no consensus on how to go forward. The interview with Iguodala, and supplemental reporting by his colleague Mahoney, led to AP being able to break the news that teams would resume practice Friday and playing games Saturday.https://bit.ly/2Zsl7R7https://bit.ly/33fyFk6https://bit.ly/2RjPqVvhttps://bit.ly/3bJ5XvI

Preparation pays off as NBA player chooses to stand for anthem

used access and anticipation to set up and deliver an exclusive multiformat package from inside the NBA bubble. When Miami Heat forward Meyers Leonard stood during the national anthem while his teammates knelt before their season’s reopening game, Reynolds had his full story on the wire within five minutes of the end of the anthem, and his interview package, including video, was hours ahead of other outlets, who credited AP.https://bit.ly/2DuUNxThttps://bit.ly/2Psz7oA