for their speedy reaction and brilliant teamwork that allowed AP to be the first international news agency to deploy across formats at the scene of a devastating dam collapse in southeastern Brazil that killed more than 100 people and left 200 missing. The AP dominated play in television and front pages across the world. https://bit.ly/2RP1TU2

AP Exclusive: Brazil’s plan to protect rainforest has opposite effect

revealed the disturbing truth about environmental enforcement in Brazil’s Amazon. While reporting on the first days of the 2020 burning season they found that agents of Brazil’s environmental crime enforcement agency had gone almost totally inactive, and that since President Jair Bolsonaro put the army in charge of protecting the rainforest, Brazil’s once-effective investigation and prosecution of rainforest destruction has come to a virtual halt.Investigating on the ground and by phone with sources around Brazil, the team found that Brazil’s army is focusing on small road-and-bridge-building projects that allow exports to flow faster to ports and ease access to protected areas. Meanwhile, the enforcement agency has stopped using satellite maps to locate deforestation sites and fine their owners — a once-widely used technique — and is no longer penalizing illegal logging, mining and farming. On the heels of massive fires last year, this year’s burning season is on track to be as bad as 2019.The all-formats story received heavy play globally in broadcast, print and hundreds of online news outlets.https://bit.ly/3hWs3gKhttps://bit.ly/31U1fbnhttps://bit.ly/2YWpHXp

for their all-formats coverage that documented how millions in Brazil, once a model of poverty eradication, were going back into extreme poverty. https://apnews.com/89afd8d964984eb69678129e7d4a16c...

From Brazil to Boston, tracing a surge of Brazilian migrants

for tracing a little-noticed surge in Brazilians crossing into the U.S. Leveraging AP’s footprint from Brazil to Texas to Boston, the deeply reported story documented an astonishing number of Brazilians pouring through El Paso. Hundreds of them had ridden with a single cab driver who Attanasio found by canvassing taxi stands at border bridges, while in Boston, Marcelo found a recently-arrived mechanic, adding texture to the story. https://bit.ly/2PG3jh7

went beyond just documenting the fires that swept across Brazil’s Pantanal wetlands, decimating wildlife, but also reported that the government’s meager response allowed the blazes to spiral out of control. Almost one-quarter of the Pantanal, the world’s largest tropical wetlands, went up in flames – an area bigger than the state of Maryland, and double what California lost this year.

The Brazilian government said it mobilized hundreds of troops and agents. as well as aircraft dropping water, to douse the fires. The AP team used witness testimonials, local data and its journalists’ own observations – they didn’t find a single armed forces member during five days in the northern Pantanal, where the fires were centered. Sources yielded further evidence and a government source who was involved in the Pantanal fire response later confirmed the AP’s findings, despite continued assertions by Brazil’s environment ministry that its response was stellar.

The team produced multiple packages with especially strong video and photos. The work was the most used from Latin America by AP clients for all of September.https://bit.ly/33zTrMvhttps://bit.ly/36KwSad

teamed up to make AP the first news organization to report the extremely sensitive and timely story of Brazilian women starting to travel to Argentina for now-legal abortions.The complex all-formats story required coordination between Brazilian and Argentine bureaus to follow individuals crossing the border, and awareness of the shifting legal issues in both countries. The staffers had to ensure that AP was presenting the story and its protagonists in a way that was fair, useful to clients, and — most importantly — minimized risks of our interviewees facing backlash.The AP had unique access to a 20-year-old woman traveling to Argentina who agreed to show her masked face and be quoted by her first name. They had worked diligently to cultivate her trust and that of the nongovernmental agency assisting her, repeatedly addressing concerns without applying pressure.Ultimately, both the woman and the agency were comfortable with the result: The package offered a uniquely intimate perspective into this highly controversial issue that disproportinately affects women from socially disadvantaged backgrounds. https://bit.ly/3bws3nd

for capturing exclusive photos and video of soldiers doing patrols during the first days of a military takeover to deter crime in Rio de Janeiro. The images helped shape debate about the government-ordered intervention. http://bit.ly/2GRbwrl

teamed up to expose those involved in Brazil's illegal gold trade, from the illicit mining on Indigenous lands to the global market.Mining on Indigenous lands in Brazil is not new. Numerous stories have been done on the practice, detailing the environmental and cultural impact of the illegal gold mining. But the AP investigation went a step further, naming those involved in the practice and tracing how the precious mineral travels from the mines of Brazil to global brands.For their widely read investigative stories, published in English, Spanish and Portuguese, Brazil News Director Biller, Latin America correspondent Goodman and freelance journalist Cowie obtained dozens of documents and conducted interviews with prosecutors, federal law enforcement agents, miners and industry insiders.Cowie and photographer Penner trekked hundreds of miles into the Amazon to report comprehensively on those engaged in the illegal mining and those involved in the illegal gold trade — a cross section of individuals and companies ranging from shady fly-by-night operators to legitimate businesses.Among their findings: Brazil is investigating an air taxi company contracted by the country’s health mionistry that transports Indigenous people and medical equipment. The company is also suspected of using its planes to bring in prospectors and supplies for illegal mining.And a thorough AP review of public records revealed that Marsam, a refinery that provided minerals for Brazil’s 2016 Olympic gold medals and now processes gold ultimately purchased by hundreds of well-known publicly traded U.S. companies — among them Microsoft, Tesla and Amazon — is linked to an intermediary accused by prosecutors of buying gold mined illegally on Indigenous lands and other areas deep in the Amazon rainforest.https://bit.ly/3HWThQDhttps://bit.ly/3qnwc3Nhttps://bit.ly/3FzcFSb

for an exclusive look at a number of investigations under way in Brazil into offshoots of the U.S.-based World of Faith Fellowship sect. http://bit.ly/2yA7a6U

traveled to Cabo Frio, a tourist city a couple hours north of Rio de Janeiro which has been wracked with problems and violence following a surge of Bitcoin pyramid schemes. Reporting in all formats, their trip followed Brazil’s federal police bust last April of three people loading a chopper with $1.3 million in neatly packed bills.Brazil-based text stringer Jeantet obtained hundreds of police and prosecutors’ reports regarding the alleged pyramid scheme run by the town’s top dog, Glaidson dos Santos. She sorted through the reports, crafting a gripping narrative of the man's rise to power and fortune, and his eventual imprisonment. But she also discovered the story was more complex, with many of dos Santos’ former clients swearing that he was being wrongly accused for having the audacity to beat a rigged financial system at its own game.Such nuance gave the reader an inside look at why Bitcoin has become hugely popular in Brazil. Senior cameraman Lobão delivered video footage produced by Tatiana Pollastri, and photo freelancer Prado made the stills. The text story was published in English, Spanish and Portuguese, picked up by publications from USA Today to The Times of India.https://aplink.news/j5xhttps://aplink.video/5s2

for making the AP the only international news organization to gain access – in all formats – to a historic hearing on a reserve in the Amazon where members of the Waimiri-Atroari tribe recounted the slaughter of numerous members, allegedly by the army, as Brazil’s dictatorship government in the 1970s pushed to build a road through the jungle.https://bit.ly/2u6spdmhttps://bit.ly/2TKlZih

secured exclusive access to take a camera into an ICU in a working class city north of Rio. With Brazil suffering the most COVID-19 cases and deaths in Latin America, media outlets have clamored for access to hospitals, without success. Fisch worked associates and contacts, finally convincing a city health secretary to grant access to the Sao Jose municipal hospital. She made the most of an hour inside the unit on Saturday, working among medical staff to produce all-formats content that was well-received by clients. Her video was the most-used on AP Video Hub for the weekend.https://bit.ly/2AQ81Uqhttps://bit.ly/3e8tRRc

A mother hopes against hope after Brazil dam collapse

for a compelling story and photos on a mother desperate to find her son after the Vale mining dam collapse in Brazil killed more than 100, with many still missing. In the aftermath of the initial coverage, Correa's widely played package documented the pain of one family among many, needing to hope that a loved one was still alive while fearing the worst. https://bit.ly/2Sg0Oohhttps://bit.ly/2UMtD8C

for getting exclusive access to a Brazil penitentiary where the country’s worst prison massacre in 25 years happened, and for obtaining the results of an investigative probe. http://apne.ws/2llQMgo

The end of May saw unprecedented news: The coronavirus pandemic continued to spread infection and wreak economic havoc around the globe, while much of the world’s attention pivoted suddenly to protests across the U.S. that spread to Paris, London, Australia and elsewhere after the suffocation death of George Floyd in Minneapolis on May 25.

This week’s Best of the Week recognizes AP’s work surrounding each of those mega-stories, with top honors going to Baltimore-based photographer Julio Cortez for his iconic photo of a protester holding an American flag aloft, and to the AP all-formats team in Brazil for continuing coverage of the virus in a nation being ravaged by COVID-19.

AP ahead on disappearance, killings of British journalist and Indigenous expert in the Amazon

From the announcement that Dom Phillips and Bruno Araújo Pereira were missing, AP mobilized to provide first agency photo and video coverage. AP had staff on the ground well before any other international media — and before federal police arrived to investigate.

As the story developed, regional expertise helped AP report accurately, avoiding the reporting mistakes of other media, and expand beyond the spot news with enterprising coverage, including profiles and an explainer, placing the tragedy in context.

for tracking down and convincing devastated families to tell the stories of losing their children to stray bullets in Rio, just a year after Brazil hosted the Olympic Games. http://bit.ly/2gcfjaT 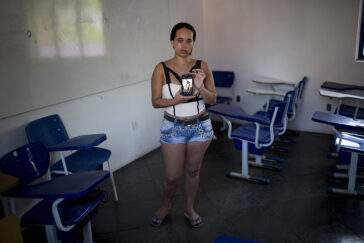 for the first on-camera interview with the Brazilian consul general, one of few people to meet with former Nissan chairman Carlos Ghosn, who was arrested over suspicion of underreporting millions in income. Ghosn, once one of the most powerful men in the business world, was reportedly holding up well during his detention in Japan, and was asking for thrillers to read. https://bit.ly/2QMhP8l

International efforts to repair the planet, one tree at a time

for the third installment of the “What Can Be Saved” series, working across departments, formats and international borders to document tree-planting efforts in Peru, Brazil and West Virginia, all aimed at reversing some of the damage of global deforestation.https://bit.ly/2okaOiwhttps://apnews.com/WhatCanBeSaved