Lori Gonzalez wipes a tear away after visiting the temporary grave marker of her sister, Kaiser Permanente Fresno Medical Center nurse Sandra Oldfield, at the Sanger Cemetery in Sanger, Calif., Aug. 29, 2020. Oldfield and her colleagues said they had felt unsafe at work and had raised concerns with their managers – they said they needed N95 masks, the most powerful protection against contracting COVID-19. Oldfield became sick after caring for a COVID-19 patient in March; she died of the disease, May 25, 2020.

Ukraine revisited: A surge of COVID, a shortage of doctors 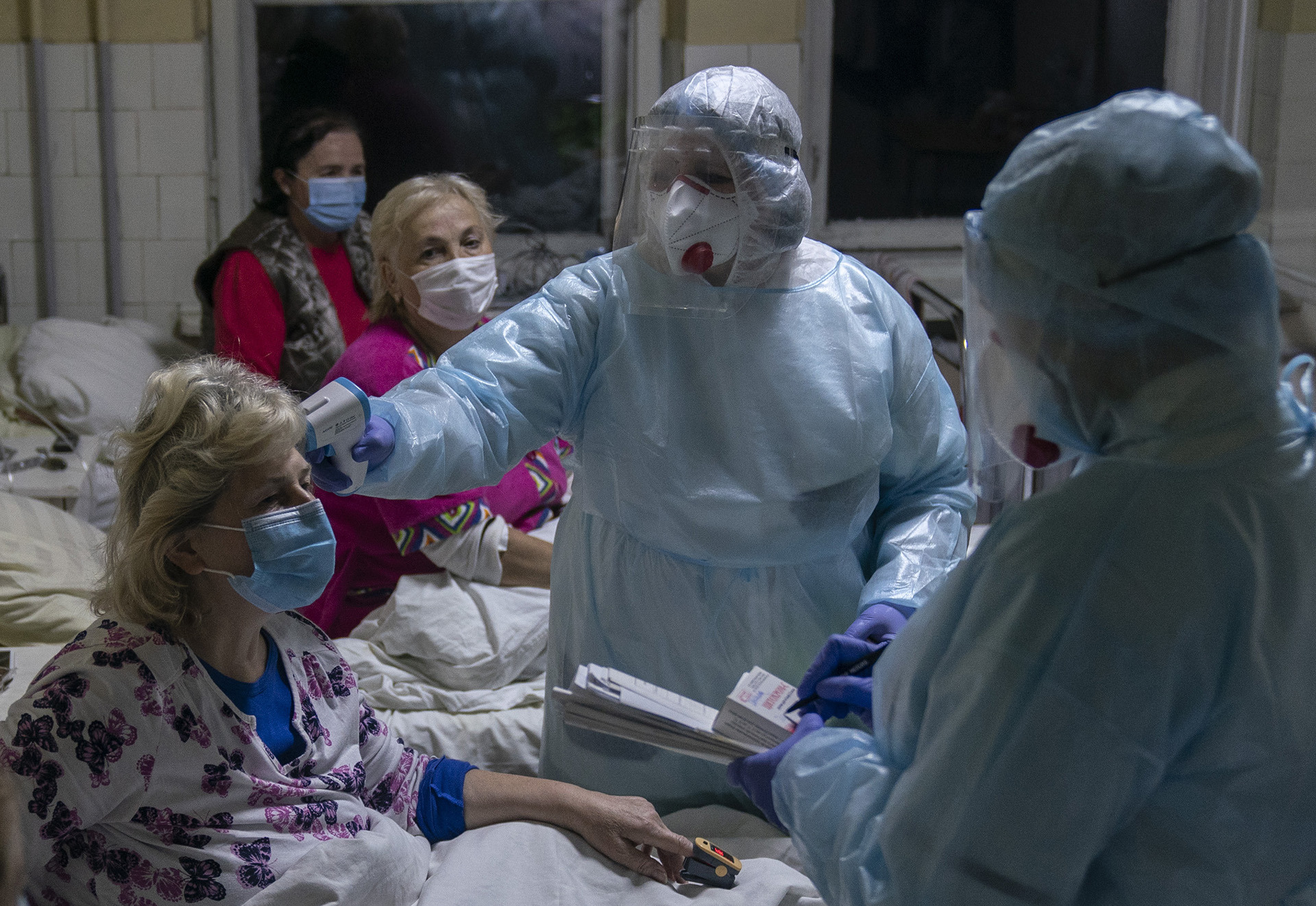 The Associated Press and “Frontline” conduct a sweeping seven-month investigation to reveal the failures that led to deadly shortages of essential medical gear in the U.S.

In collaboration with public television’s “Frontline,” the Center for Global Reporting and AP reporters worldwide, “America’s Medical Supply Crisis” offered a sweeping examination of the nation’s fragmented medical supply chain, identifying a series of missteps in government and the healthcare system that contributed to one of the highest death rates per capita in the world.

“So many thousands of people have died needlessly.” An @AP, @frontlinepbs and @GlobalRepCentre investigation found that a catastrophic collapse of worldwide medical supply chains contributed to the failure of the U.S. to control the coronavirus outbreak. https://t.co/oOyRbzrqP6

The investigation elicited praise from public health experts and response from bipartisan members of Congress who are pushing legislation to solve dangerous shortages of masks, gloves, test swabs and other essential items in the United States.

– The mainbar story and an abridged version.
– A ‘Frontline’ film reported by Linderman and Mendoza.
– An AP video on counterfeit masks by Allen Breed.
– A photo package.
– An interactive graphic page.
– A five-takeaways piece.
– An investigative ‘Frontline Dispatch’ podcast.
– An extended recorded interview with White House trade adviser Peter Navarro.
– A Pulitzer Center lesson plan on the subject for teachers.

Edited by AP’s Jerry Schwartz, Chris Hulme, Alison Kodjak and Ron Nixon, this ambitious company-wide effort would have been a major challenge in any year. But with COVID-19-related mask and distance requirements and travel restrictions, the reporters had to be even more resourceful and collaborative.

Throughout the reporting this year, Linderman and Mendoza interviewed more than 100 people including nurses and doctors, medical and supply chain experts, manufacturers of personal protective equipment, and officials from the Bush, Clinton, Obama and Trump administrations. They filed Freedom of Information Act requests and pressed agencies and companies for documents.

White House Trade director Peter Navarro challenged @AP/@frontlinepbs to air our interview with him about the US medical supply crisis. Here it is: https://t.co/KgI0S11Pyl

They had several scoops for the “Deadly Shortages” series including:

– The contract for the most needles and syringes went to a new company with an untested, unapproved device and no factory.
– Imports of critical medical supplies abruptly stopped when cases across the nation began to soar.
– Counterfeit PPE flooded the U.S. market.

Nurse Sandra Oldfield holds a “#FlattentheCurve” sign at the Kaiser Permanente Fresno Medical Center hospital in Fresno, Calif., March 26, 2020. Oldfield and her colleagues told managers they needed the protection of N95 masks; she died May 25 after caring for a COVID-19 patient. Although it will take years to understand why the pandemic was disproportionately worse in the U.S. than in other countries, early studies are finding that U.S. shortages of masks, gloves, gowns, shields, testing kits and other essential medical supplies cost lives.

Lori Gonzalez, left, and Rachel Spray carry flowers to the temporary grave marker of Gonzalez’s sister, nurse Sandra Oldfield, at the Sanger Cemetery in Sanger, Calif., Aug. 29, 2020. Oldfield died after being exposed to COVID-19. Workers at Kaiser Permanente Fresno Medical Center say they did not have the proper personal protective equipment.

Rachel Spray, a nurse at the Kaiser Permanente Fresno Medical Center, sits near the grave of colleague and friend, Sandra Oldfield, at the Sanger Cemetery in Sanger, Calif., Aug. 29, 2020. Oldfield died in may after being exposed to COVID-19.

Lori Gonzalez, right and her daughter, Mariah Rodriguez, hold hands at the temporary grave marker of Gonzalez’s sister, nurse Sandra Oldfield, at the Sanger Cemetery in Sanger, Calif., Aug. 29, 2020. Oldfield died after being exposed to a patient who had COVID-19. Workers at Kaiser Permanente Fresno Medical Centerl say they did not have the proper personal protective equipment.

Nurses Michael Gulick, center, and Angela Gatdula, right, hold their arms up in protest outside of Providence Saint John’s Health Center in Santa Monica, Calif., April 21, 2020. The hospital suspended 10 nurses, including Gulick, the previous week after they refused to care for COVID-19 patients without being provided protective N95 face masks. Gatdula says she contracted COVID-19 and has recovered.

Workers pack surgical masks at a factory in Suining, in southwest China's Sichuan province, Feb. 7, 2020. For decades, warnings about the risks associated with America’s overdependence on foreign manufacturing of medical supplies, and a lack of adequate preparation at home, have gone unheeded, AP found in a joint investigation.

Prestige Ameritech Executive Vice President Mike Bowen testifies before a House subcommittee on Capitol Hill, May 14, 2020, to discuss protecting scientific integrity in response to the coronavirus outbreak. For several years, Bowen’s company has asked the Defense Department to buy their surgical masks, citing the Berry Amendment, a statutory amendment requiring the military to buy U.S.-made apparel. In response, Bowen says, the Defense Department told the company their masks aren’t apparel.

Workstations are used to produce medical ventilators at the Ford Rawsonville plant in Ypsilanti Township, Mich., May 13, 2020. An area of the plant was converted into a ventilator factory to address shortages of the life-saving devices.

Ford Motor Co. employees work on a medical ventilator at the Rawsonville plant in Ypsilanti Township, Mich., May 13, 2020.

A face mask is printed at 3D-Standard LLC in Houston, April 3, 2020. The company transitioned to making reusable masks that are washable and have a replaceable filter to help ease the shortage during of PPE the COVID-19 outbreak.

Researcher William Bennett tilts his head back to test the fit of a mask inside a sealed chamber in a lab at the University of North Carolina in Chapel Hill, N.C., Aug. 7, 2020. Working with Dr. Philip Clapp, Bennett tested several different masks collected by the AP, including ones imported by an NGO, others donated to frontline workers by major tech firms, and masks AP had handed out to its own staff. “All of it was counterfeit, as defined by OSHA's definition of counterfeit or fraudulently labeled,” said Clapp. Some were less than 50% efficient, about the same as a cotton T-shirt.

Used medical masks are prepared for disinfecting at the Battelle N95 decontamination site in Somerville, Mass., April 11, 2020. Because of shortages in 2020, the Centers for Disease Control and Prevention has revised its guidance to allow health care workers to reuse protective equipment, contradicting manufacturers’ guidance.

Isaac Larian, CEO of MGA Entertainment, helps to load a shipment of N95 masks at a warehouse in Los Angeles, April 23, 2020. Larian was able to secure N95 masks through the Chinese supplier of his toy company, to distribute to health workers and first responders during the COVID-19 pandemic.

Workers carry boxes at the Strategic National Stockpile warehouse in Oklahoma City, Okla., April 7, 2020. University of California, Berkeley Professor William Dow and his colleagues say there would be massive savings, in lives and tax dollars, if the government invested more in buying and stockpiling supplies.

As well as praise from across the political spectrum, the story garnered nearly 100,000 pageviews on AP News. The “Frontline” piece was highlighted in the Washington Post, the Los Angeles Times, Reality Blurred and Poynter, and the reporters were interviewed on a half-dozen local radio stations around the U.S.

For breaking down a complex topic and showing the critical importance of medical supply chains during the pandemic, and the human costs when those supply chains fail, Linderman and Mendoza share AP’s Best of the Week award.